My girlfriends had put together a recipe scrapbook for me as a wedding gift, and my mom’s contribution was this Korean cucumber side dish recipe. This was probably one of the first recipes I learned as a newlywed and is still one of my go-to’s.

I seriously can just eat this with rice most days. Or I even add in gochujang and sesame oil and make a cheat version of bibimbap.

I remember during the first few months of marriage, I felt this overwhelming amount of pressure to be a cookie-cutter wife. Through observing other successfully married couples, a part of me wanted to follow in their footsteps.

It took me a while to realize that just because I didn’t know how to cook, clean, or do any of the traditional housewife duties, it didn’t make me the world’s worst wife (maybe just the bottom 5%). Luckily, we found our own dynamic that works for us. I usually like to be adventurous and try new recipes, while Jacob does the day to day cooking.

If you’re like me and find cooking to be daunting, this is a great, simple cucumber dish to ease you in. Oh, you should probably like Korean food too! If you haven’t tried Korean food yet, what’s stopping you? 🙂

If you want to try another easy recipe, my mom’s Korean perilla leaves recipe is similar. 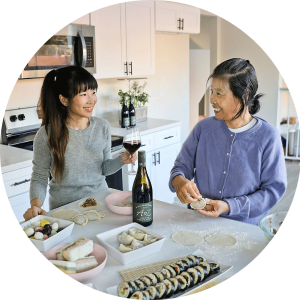 Hi, we’re Esther + Grace! This is a mom and daughter blog sharing authentic Korean recipes. Grace does all the cooking by taste (with a handful of this and that as Korean moms do), while Esther follows her around the kitchen to meticulously measure all the ingredients.